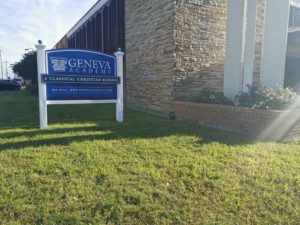 Geneva Academy is reaching the end of its first school year in a newly renovated facility on Cypress Street in West Monroe.

The school, previously housed off Oliver Road in Monroe, moved in the summer of 2018 to the educational wing of a building owned by Church of the Redeemer.

“We more than doubled our square footage, but we needed to make it into usable space,” said Ed Lang, Geneva Academy Headmaster. “There was extensive work required for us to begin school here. The whole place needed a new sprinkler system.” 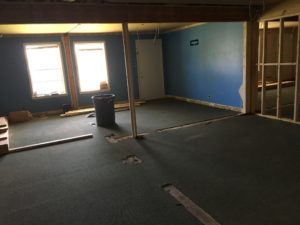 The school also spent about $70,000 to renovate classrooms.

“We needed five larger classrooms made out of smaller rooms that were already here,” Lang said. “We needed to rearrange the vast square footage and make it into usable space.”

When Geneva Academy relocated, there was no playground on the grounds.

“There was an empty concrete pad for parking, so we spent $7,000 to enclose the area with a fence, relocate our playground and lay down tire rubber mulch,” Lang said.

While visiting the new facility, students’ parents have often remarked on how much more room the students now have in their classrooms.

“We’re hoping we have the space to handle new student enrollment in the fall, but we may need to talk about adding classrooms next year, especially as our lower school students advance,” Lang said. 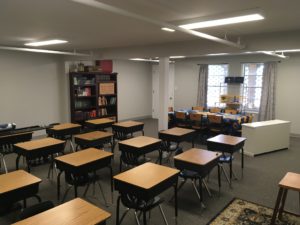 “It’s nice to be in a central location, close to the interstate, a place easy for people to access, and we’re enjoying the people of West Monroe,” he added.