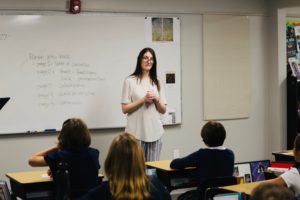 She obtained a bachelor of liberal arts in Speech Communication and Theatre from Northeast Louisiana University (now University of Louisiana-Monroe).

“I’m thankful the Lord sent us Mrs. Rader,” said Geneva Academy Headmaster Ed Lang.  “I love that she’s a local and has years of experience in Christian schooling. She’s also eager to learn more about classical education, so I know she’ll be a great example to her students.”

“It was wonderful,” Rader said. “I came away with a better understanding of the classical Christian approach to education and an appreciation for it. I noticed the difference between calling yourself a Christian school and being a Christian school.” 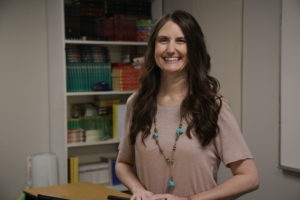 “What I really liked about it was how they tied everything to God,” Rader continued.  “The question, ‘When am I ever going to need this in the real world?’ is something I’ve heard over and over again from kids in the classroom.

At the seminar, when a child says something like that, I learned you have to respond by saying, ‘You’re not allowed to hate math, because God created it, and it’s how we learn about Him and the world.’ Someone was speaking about bugs and spiders – and I don’t get along with spiders, ew – and the fly and they said, ‘I’m not telling you not to kill the fly or the spider, but think about how awesome it is before you smash it.’ I love that.”

Rader said she knew she wanted to be a teacher since her childhood. At the university, she decided against studying in the education program because of her experience as an intern at the state Office of Youth Development.

“I typed up one too many things about first graders stabbing each other,” Rader said. “I saw enough of that kind of thing that I eventually decided I did not want to be a teacher.”

Later, God called her to teach.

“When those kids become my kids, that’s what I love about teaching,” she said.

Rader is a Bastrop native. She lives in Swartz with her husband, David, and their daughter, LauraGrace.