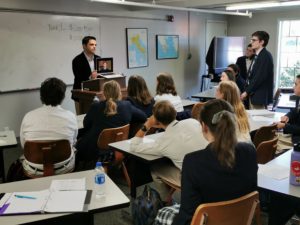 Geneva Academy instructor Deacon James, at left, shows a Saturday Night Live skit about the insanity of buying things you cannot afford to students in his economics course. The course is taught to 10th, 11th, and 12th graders.

The obtuse characters played by Steve Martin and Amy Poehler don’t understand why you can’t buy things now and pay for them later. The students standing to watch the clip laugh and return to their seats. James doesn’t let the students linger over their enjoyment of the skit.

“You guys are fortunate: you can’t make a huge mistake now, but you need to set a pattern for yourself, for your future, now,” James says. “If you don’t control your spending now, when your friends go out to a movie or go out to eat and invite you to join them, and you never think about whether you can afford to, then you’re setting a pattern for yourself when you have a spouse and children.”

The lesson for the class period entails an overview of investments and budgeting. As an introduction to the importance of budgeting, James offers a sobering analogy.

“The way to track your spending and understand where your money should go is through a budget,” he adds.

When James asks for students to define a budget, a handful raise their hands and identify budgeting as, for example, “allocating your income to certain expenses each month.” Their answers are close, but there are more uses for money than just spending, James notes. He writes on the board that a budget is a written, proactive plan for spending, saving, and giving that will take place each month.

“That means you’re not budgeting July’s spending in August,” he says.  “That’s accounting, that’s not budgeting.

James asks students to practice a budgeting exercise by thinking about their desire to attend a local fair scheduled to come to town. He touts the benefits of budgeting by setting aside cash in envelopes marked for different categories of spending, saving, and giving.

“With a cash envelope, you get to feel the money in there, and you feel the pain of it going away,” James said. “When you open the cash envelope and there’s only two dollars, and you’ve still got weeks to go before the month is over, you know you can’t go to Chik-Fil-A.”

When James reviews the fundamentals of investments with students, a similar message takes shape: Plan for the future.

In discussing finance, he asks students to define “interest.”

“Money you have to pay for borrowing money,” says Sophie Booth, a junior.

“Albert Einstein said that compound interest is the most powerful force in the universe,” James says. “The first key to investing is putting in money year after year, and collecting money on the money you’ve earned. The point of all this is that it’s important to start investing early.”