Geneva apologetics course: Did Jesus really sound like that?

Whether Jesus existed or whether He said the things recorded in the gospels are some of the questions for which Geneva Academy seniors are preparing to answer in their apologetics course. 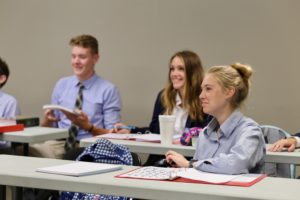 Under Pastor Drew Maney’s direction, the seniors are reading — among other books — Nicholas Perrin’s Lost in Transmission: What We Can Know About the Words of Jesus. Perrin’s book challenges other modern thinkers like Bart Ehrman who have claimed that scribes seeking to preserve biblical accounts (prior to the printing press) choked the records of Jesus’ message with so many errors that we can no longer know for sure what He said or meant.

“I chose Perrin’s book because he uses the epistemology articulated by Esther Meek (in A Little Manual for Knowing) and because he winsomely but comprehensively interacts with the attacks against scripture by Bart Ehrman,” Maney says.  “I am hoping that the students will have a more solid assurance that the Bible is God’s word and that they can interact well with those who disagree.”

Hays Porter, a senior at Geneva Academy, says Perrin’s book has enhanced his understanding of how different people or groups view the Bible — and how to respond to them.

“In this book, he’s dealing with some interesting aspects of how we view God’s word that I wasn’t familiar with beforehand,” Porter says. “He’s viewing the problem from the eyes of an everyday person, which means we can all easily grasp everything.”

For example, Porter says Perrin’s book helped him address the question of whether certain scribes’ devotion to Christianity as a religion improperly influenced their copying of the New Testament text.

“Some of these scribes would have been the first people to catch a mistake in the text,” Porter says. “We don’t know this 100 percent, but that kind of person probably would have known exactly what he was looking at because he loved it and dwelt richly in the Word.”

“I’ve never seen anyone really approach the problem like this before,” he adds.

Porter says the book’s insistence on revelation as a human process also points to the nature of God.

“It really drives home that He is a personal God,” Porter says. “He isn’t sitting up there, commanding from a throne. He is active in the lives of His people and wants His people to be active in work with Him.”

“He explains things in a way that nobody I know really does,” Porter says. “He doesn’t really tell you the answer to your question, which can be frustrating, but it’s because I’m supposed to take what he’s hinting at and work through it on my own.”